What is Poa annua?

In a recent article published in the AGCSA Turf Management Magazine, John Neylan looks at a number of ongoing trials which add to the industry’s knowledge base surrounding Poa annua and its ubiquitous nature.

Here's below the transcript of the article, with the AGCSA graceful authorisation.

In Victoria during 2020, there was a lot of time to fill in during the periods of lock down brought about by COVID-19.

Getting out and about was limited and it provided John with yet another opportunity to explore and test some theories that he had regarding his favourite weed – Poa annua.

The area of interest that John had was whether the Poa annua types that had exhibited herbicide tolerance/resistance in specific locations were similar in there morphological characteristics. This is based on Poa annua exhibiting a high level of self-fertility and a rapid life-cycle that ensures a single plant is enough to build up a large population of potentially herbicide-tolerant plants within a year or two.

Based on this theory it could be expected that there will be less diversity in the Poa annua population as the herbicide-susceptible plants are killed off.

The project involved collecting plants from several golf course fairways where there had been herbicide tolerance or confirmed herbicide resistance. The plants were collected, established in pots and then various plant characteristics measured.

In addition to the collection of plants from the golf courses, annual plants were selected from a home lawn to determine what variation may exist in a population that has had little or no herbicide pressure. This provided a basic morphological map of the Poa annua population where the observable characteristics, such as plant height, plant diameter, tiller number and flower numbers were measured. The plants were not cut down at any stage and were allowed to grow to their full size.

Seed bank: In addition to growing the plants collected, the thatch layer they were growing in was broken up and then planted in pots to determine the underlying seed bank. As a second phase of the project, the plants that were established from the seeds were also grown on as individual plants and the morphological characteristics also described.

This was to gauge how close to type the progeny were to the parents and what variation may exist.

Herbicide trial: The final trial was to take the seedling plants that were grown to maturity and then a herbicide was applied to determine what level of tolerance there was across the populations. The plants used in the herbicide trial were regularly trimmed to maintain a compact plant.

Once the individual plants were removed from the plug, the thatch layer was dissected and spread onto a prepared seedling tray to observe the rate of germination and seedling numbers (Figure 1). 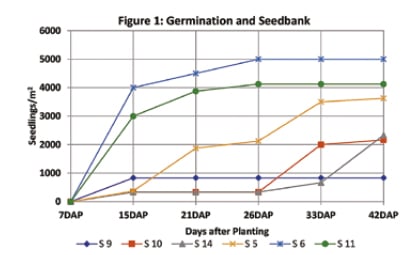 There were several interesting observations between the different locations on the same golf course:

These trials looked at whether Poa annua types that had exhibited herbicide tolerance/resistance in specific locations were similar in there morphological characteristics.

At three locations (S6, S9 and S11) the majority of the seedlings appeared around 15 days after planting. At locations S10 and S14 there was small amount of early germination with the peak at about 33-42 days after planting. At S5 it was more of a staggered germination across 33 days. Wu et.al. (1987) noted the same germination patterns in different Poa annua populations when germinated at 25oC. The lag in the germination of seeds or inbuilt dormancy reflected the source of the seed. That is, the seed from roughs where there was limited water had a greater percentage of dormant seeds. In this current research, all locations received the same level of water and nutrition and the possible variation in the germination of seeds appears to be mainly related to natural variation and in-built survival mechanism.

TAKE HOME MESSAGE 1: The seed bank is large and careful attention to the application of pre-emergent herbicides is essential.

TAKE HOME MESSAGE 2: With the variation in the pattern of germination, it is essential that there is sufficient pre-emergent herbicide available across the entire period of likely germination.

QUESTION: On a golf course with a diligent pre-emergent herbicide programme, would we expect the seed bank to gradually reduce?

At each of the seven sites there was variation in the plant characteristics including plant height, tiller number, plant diameter and flower number with an example of the data provided in Figures 2, 3 and 4. It was postulated that the plant population would have less variation due to the selection pressures from regular herbicide applications.

However, the population distribution is similar to that noted by Neylan and Peart (2009) where there is a concentration of plants with similar characteristics but a small proportion representing the extremes.

Across the plants collected from the same golf course but different fairways there were significant differences in plant height, plant diameter and the number of flowers produced (Table 1). The annual plants produced the highest number of flower heads (except for the plants from S11) and were typically in the taller group of plants and those with the greatest diameter.

TAKE HOME MESSAGE 3: There will always be variation in the Poa annua population and the potential for ‘survivors’.

Wherever there are surviving Poa annua plants following herbicide applications, manually remove them.

The seedlings that were grown from the seed bank were established into separate pots and grown on to maturity and then the characteristics determined as above. The purpose was to measure the variation in the population and to determine the relationship with the parent population. Figures 5 and 6 provide an example of the data and there are two observations;

The difference between the two populations may well be related to the number of plants collected (i.e. too few plants).

However, given that the seedlings were from immediately below the individual plants the expectation would be that there would be some similarity. There is still a lot to understand.

TAKE HOME MESSAGE 4: With the potentially broader range of plants from the progeny of established plants, there is increased opportunity for survival of the Poa annua population.

QUESTION: With the seedling population, is there a certain proportion of natural seedling death that results in a narrower population variation?

QUESTION: Are some of these seedlings killed with a herbicide application that narrows the mature population?

A collection of plants from the same population were treated with propyzamide at 1.2L/ ha (a.i. 500g/L propyzamide) to determine what variation there may be in herbicide susceptibility. There were two applications of herbicide on 19/9/20 and 18/10/20 with 12mm of irrigation applied after application and 24 hours after application. The weather was warm and mild across the 48 days of the trial. 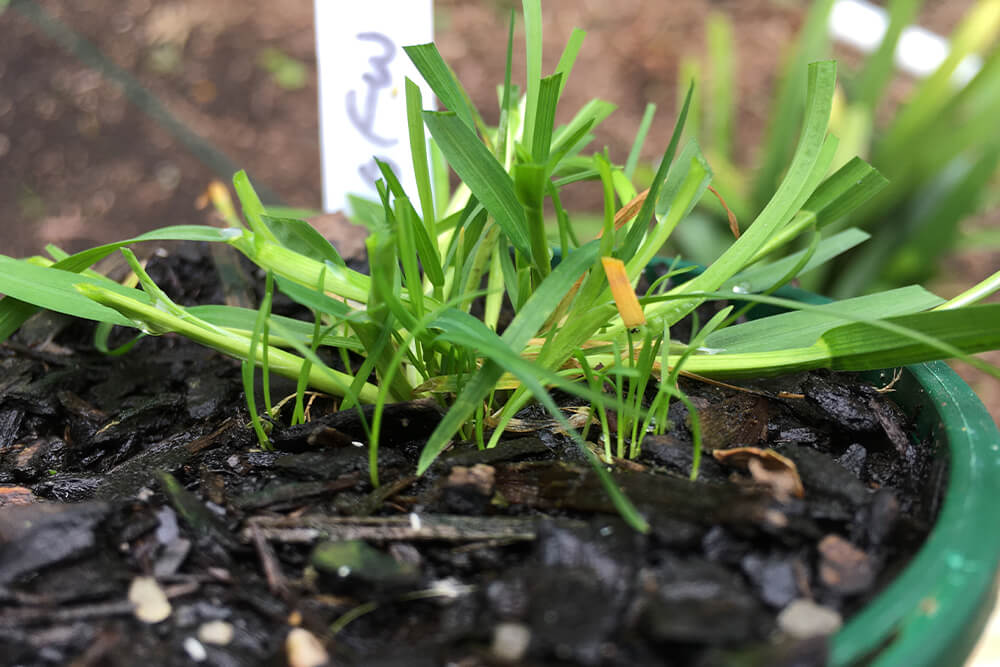 During the trials other observations were made such as rooting from the node and the rapid germination of new seeds.

The herbicide treatments were applied to the five populations of plants collected from golf course fairways and the results were similar in that there was variation in the susceptibility to the herbicide. Some of the data for one Poa annua population is detailed in Figures 7 and 8 and the following observations were made:

TAKE HOME MESSAGE 5: There was some observable variation in the reaction to the herbicide applications.

TAKE HOME MESSAGE 6: These results highlight the importance of follow up herbicide applications if reasonable control is to be obtained. 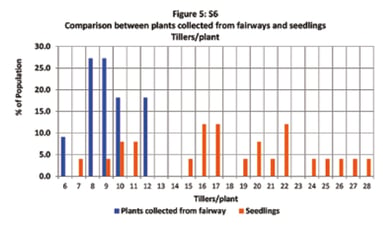 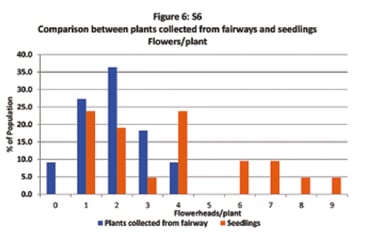 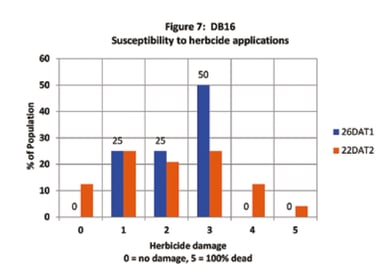 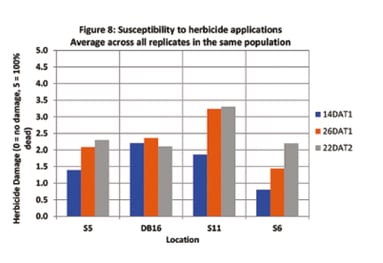 Over the past 12 to 18 months of observing Poa annua and growing them, there are always some interesting observations to be made.

Two occurrences are worth noting:

Once this occurred germination and new seedlings emerged within about 14 days. The key seemed to be bare soil and sufficiently exposed to light to initiate germination. This capacity to flower, set seed and germinate was observed from

May through to November.

TAKE HOME MESSAGE 7: Once plants flower and set seed they can rapidly establish within the turf sward, particularly if there is adequate soil moisture. Having an adequate preemergent programme is critical.

These ongoing trials continue to add to our knowledge base and again highlight the peculiarities of individual sites. So, what have we learnt?

Because of the variation in the Poa annua population there is the potential for survival through several mechanisms. It is therefore important that every turf manager that is undertaking a Poa annua control programme thoroughly reviews the successes and failures and the survivors are removed.

REFERENCES
Neylan J. and Peart, A. 2009. A Life-cycle approach to the control of Poa annua in bentgrass putting greens.