How to design a pavement for a difficult subgrade?

The pavement (also called a base) under a synthetic turf field is critical to its success, and while there are various standards to assist with designing it when the subgrade conditions become significantly problematic, standard designs go out of the window and a bespoke pavement design is required. Patrick Beazley gives us an overview of what SPORTENG designed for Perry Park in Brisbane to address the soil conditions observed during the investigation works.

Typically, site investigation works don’t happen until projects, and budgets are approved and only then do we discover what challenges lie ahead. This was true for the futsal-court sized synthetic turf training area at Perry Park in Brisbane. The site had been chosen, the master plans circulated and approved, and the project given the green light with funds allocated before anyone really knew what was underground. SPORTENG was engaged by Brisbane City Council to prepare preliminary designs and oversee the site investigation works. After preparing our site renders that helped get stakeholder buy-in for the fence heights and layout, we set about the engineering design. 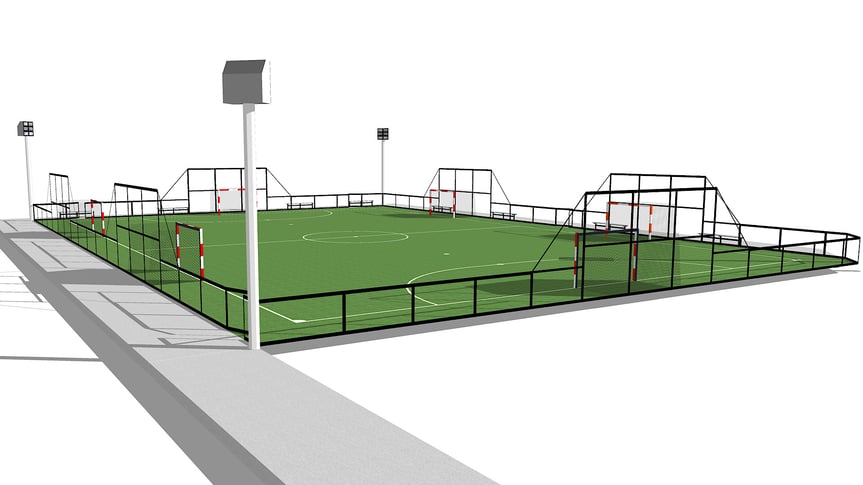 SPORTENG renders of the project before construction

We found that the site had received uncontrolled filling in its past, there was a weak ash layer at depth but we needed to present a design solution that was affordable and offered a degree of comfort to Council that the proposed synthetic turf surface would not settle. Cost-benefit analyses of synthetic turf surfaces have been completed by various organisations and the numbers only stack up if the base is constructed well enough to last multiple cycles of turf renewal. The weak soils at depth at Perry Park would require a non-standard base to be designed and constructed to maximise its lifespan.

Risk was also mentioned a lot. On a site like this, designing out all risks of settlement would be prohibitively expensive, so a decision was made as to the level of risk (and thus warranty period) that the Council would accept. Based on that, we devised subgrade preparation and base construction options. It was agreed to issue the project as a Design and Construct contract, pushing the liability back onto the Contractor, but with SPORTENG providing indicative construction options. We designed a multi-layered pavement pavement, with a geo-grid between each layer for stability. We also minimised the removal of the upper surface as this was where most of the strength was found in the existing profile. 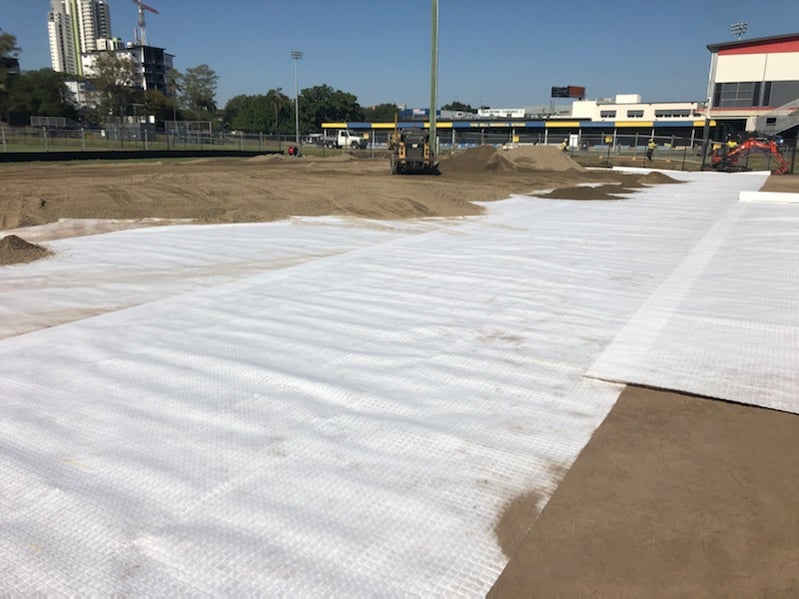 An aerial image of progress during the works

GrasSports QLD Pty Ltd was awarded the contract to build the field constructed the base using two layers, stabilised with a geogrid. The risk of settlement on this site has not been engineered out entirely, but the design means that if there is some localised settlement, the surface won’t be ruined. This was achieved by ensuring no drainage infrastructure in the base; instead using a drainage cell at the surface that could be lifted and depressions in the base filled, should they occur.

The field area was formally opened by Adrian Schrinner,  Brisbane’s Lord Mayor on 15 February 202 and is still in limited use, despite the COVID-19 pandemic, as people take advantage of the high-quality surface for social and formal football.

We hope you’ve enjoyed reading our blog. Check out our other posts and if you’d like to discuss anything covered in this blog post in more detail, contact us.