How to keep bacteria wilt away from sportfields' natural turf?

In a recent article published in the AGCSA Turf Management Magazine, leading agronomist John Neylan looks at the phenomenon of bacterial wilt in Poa annua/bentgrass greens and provides some timely strategies to get warm-season municipal sportsfields in optimum condition prior to the Winter code onslaught.

Here's below the transcript of the article, with the AGCSA graceful authorisation.

In the Summer of 2018/19, John Neylan was asked by a golf course superintendent to come and inspect his greens. It was mid-Summer and the weather conditions had been very hot and dry – ideal disease weather.

As a turfgrass agronomist, it was an interesting set of symptoms to observe and to try and make some sense of as they were totally new to him. The greens were Poa annua/bentgrass and the leaves were etiolated and yellow. The etiolation effect was creating the appearance of an uncut surface and required daily double cutting to maintain a playable surface, with the symptoms returning the next day.

At the time the symptoms occurred, there were several factors worth noting: 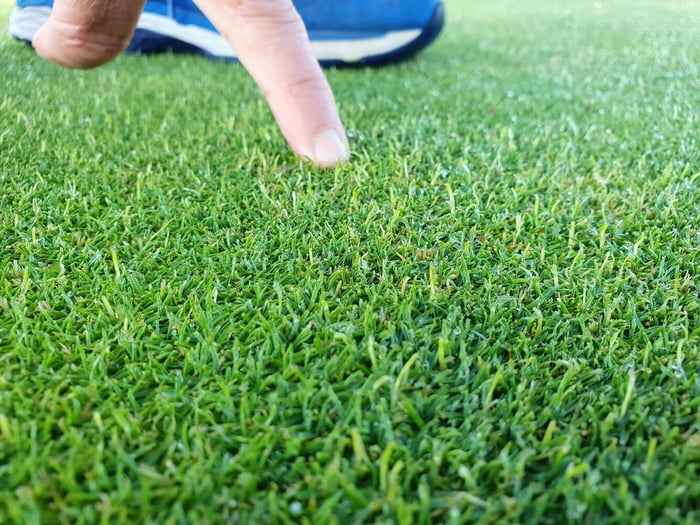 On the green pictured, the etiolation effect created the appearance of an uncut surface. It required daily double-cutting to maintain a playable surface, with the symptoms returning the next day.

The conditions were highly stressful and ideal for disease organisms to affect the turf.

But what was it? The immediate action was to take samples for disease and nematode diagnosis. Both tests came back as negative and were eliminated as the causal agents. The fungicide and nutrition programme was reviewed with no obvious factors being apparent.

The question still remained as to what was happening?

At the time, Dr. John Kaminski (Penn State University) was making a visit to Australia and he suggested that it could be ‘bacterial wilt’.

From John's perspective, this was certainly new to Australia and had not been previously diagnosed. The weather had been ideal for this ‘disease organism’ and it was very alarming when reviewing the literature on ‘bacterial wilt’ as to the potential damage that it could cause.

What is Bacterial Wilt?

A search of the TGIF database for ‘bacterial wilt’ returned about 180 references of which a select few were reviewed to better understand this disease.

In Vargas and Turgeon (2003), bacterial wilt is described as being caused by the pathogen Xanthomonas campestris and is the only known bacterial disease of Poa annua. It is also stated that it can be very damaging when it occurs in the Spring.

Bacterial wilt was described as being easily recognised by the elongated chlorotic (i.e. etiolated) shoots that extend above the rest of the turfgrass canopy and in the worst case, the disease results in severe melting out of the turf. 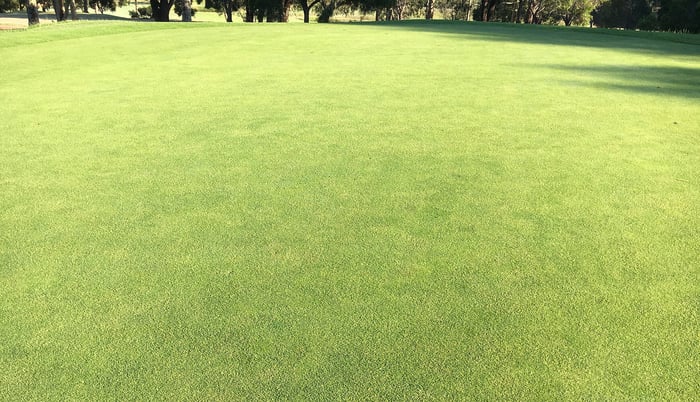 There is another related ‘disease’ that exhibits similar symptoms and is caused by Acidovorax avenae, another bacterium that causes elongation of stems, and leaves that develop rapidly overnight (Roberts and Giodano, 2016).

With this disease, it is stimulated by wet weather and rarely results in turf loss.

On the golf course in question, the disease did not progress to the degree described for the Xanthomonas sp. organism and the symptoms were more in keeping with Acidovorax sp. being the cause.

It is estimated that one gram of soil can contain up to a billion bacteria (Roberts and Giordano, 2016) of which most are benign or beneficial. Bacterial pathogens are rare and like many disease organisms, they occur widely in the environment and are associated with soils and organic matter.

Xanthomonas sp. and Acidovorax sp. overwinter in infected plants and in the soil. The disease organisms build up in the soil during the Spring and early Summer and then following Summer rainfall, plants growing in these soils may become infected with the bacteria.

The bacteria enter healthy plants through wounds caused by mowing and sand topdressing. Once the bacteria enter the plant, it then moves to the roots and crown of the plant. They multiply quickly, plugging up the xylem vessels and reducing the movement of water and nutrients, eventually plugging up enough xylem cells to cause the plants to wilt (Vargus and Giordano, 2011).

A white ‘cloud’ or stream of Xanthomonas sp. bacteria can be seen oozing from the cut leaf surface

What are the diagnostics?

The diagnostic technique in the laboratory is to take a recently infected and freshly cut leaf or stem and to examine it in a drop of water under a light microscope (at about 100x) where a white ‘cloud’ of bacteria can be seen oozing from the cut surface within a few seconds.

The AGCSATech agronomist team tried this technique and weren’t able to detect the bacterial ooze.

Samples were then sent to a plant bacterial diseases expert at the University of Queensland where an ooze test was conducted on a number of leaves. He noted that the samples were in very good condition and while many bacterial pathogens will exhibitoozing, these samples were all negative. He then took multiple leaves, sterilised them and  plated them out. This technique only detected non-specific yeasts.

Problem not yet solved!

In reviewing the literature, it again highlights that the microbiological environment is very complex while we are often looking for a single cause or a simple answer. The whole area of bacterial diseases of turf is complex and there is still a lot to understand.

In the research of Roberts et. al. (2017), it was noted that while etiolation was reported in bentgrass turf, there were few cases where Xanthomonas sp. and Acidovorax sp. were isolated.

Where samples were collected and tested, it was observed that there was a diversity of bacteria isolated, with only 26 per cent of samples having Xanthomonas translucens and Acidovorax avenae. They concluded that there are probably multiple bacteria associated with bacterial disease.

These results further reinforced the complexity of the turfgrass/soil biome and why we were unsuccessful in getting definitive determination with our samples.

Other factors that could lead to bacteria wilt outbreak

In research undertaken by Roberts and Giordiano (2016) to explore the reasons for this etiolation and overnight growth, they initially found the symptoms difficult to explain.

One of the first relationships noted was that the symptoms were more intense in areas where biostimulants and plant growth regulators (PGRs) were used in greens management.

However, research trials testing several biostimulants did not find that any of them caused the etiolation effect.

In the USA, trinexapac-ethyl had been postulated as a cause of etiolation symptoms on Poa annua.

Roberts and Giordiano (2016) tested this theory and found that where bacterial etiolation was caused by Xanthomonas sp., the trinexapacethyl reduced the severity of the symptoms.

How bacteria wilt can be kept under control?

The most important management factor in limiting the development of bacterial decline following etiolation observations is the reduction of stress. In all instances where significant turf loss has been observed, the turf was subjected to extreme conditions, including constant low mowing, extended high temperatures and drought. This is certainly a common theme with diseases – greater stress, weaker plants and greater susceptibility to plant pathogens.

The literature is quite definite that there is no quick knock down of a rapidly developing bacterial population and that immediate curative control is rarely achieved.

Bacterial wilt is not easy to control and in research trials oxytetracycline, which is a tetracycline antibiotic, was the most effective chemical control method (Vargas et. al. 2014). In the same research, a significant reduction in etiolation was observed in plots treated with chlorothalonil+acibenzolar (Daconil Action).

(Note: Daconil Action is not registered in Australia.)

There are some cultural methods that can be employed including:

What was these experiments outcome?

Back to the golf course in question, and with some trepidation, the disease was monitored through the remainder of the Summer of 2019 with no ill effects.

Regular cutting was the key to managing the effects. Trinexapac-ethyl was also removed from the greens management programme.

Basically, it disappeared by its own accord as the weather moderated in the early Autumn.
In the Spring of 2019, the first signs of etiolation were noted following renovations and subsequent sand dustings.

The Summer of 2019/20 was warm and dry with the third warmest January on record and, as in the previous year, would appear to be a stimulus for the disease.

With the Summer of 2020/21, there was some etiolation noted on the higher cut collars of greens and very little in the putting surface.

Looking at the weather, it was cooler and wetter with no clear pattern as to a possible stimulus.

From basic observations, the main stimuli for bacterial wilt appears to be leaf damage sustained from sand topdressing during renovations and then weather conditions that favour the disease

Was this bacterial etiolation a passing mystery or something that is more prominen\t but not widely reported?

Like any new turf infliction, it takes rigorous analysis to be able to come up with a firm conclusion as to the cause.

From our basic observations,  the main stimuli for the disease would appear to be the leaf damage from sand topdressing during renovations, and then the weather conditions that favour the disease. PGRs were often in the programme and may have also had some effect depending on the bacterial species.

If you see any of these odd symptoms, the first step is to take samples for analysis and send them off for testing.

In addition, note details of the use of PGRs, sulphate-based fertilisers, sand dusting and other renovation techniques and, of course, the weather.

If you have seen or are experiencing these symptoms, we would be more interested in hearing from you.